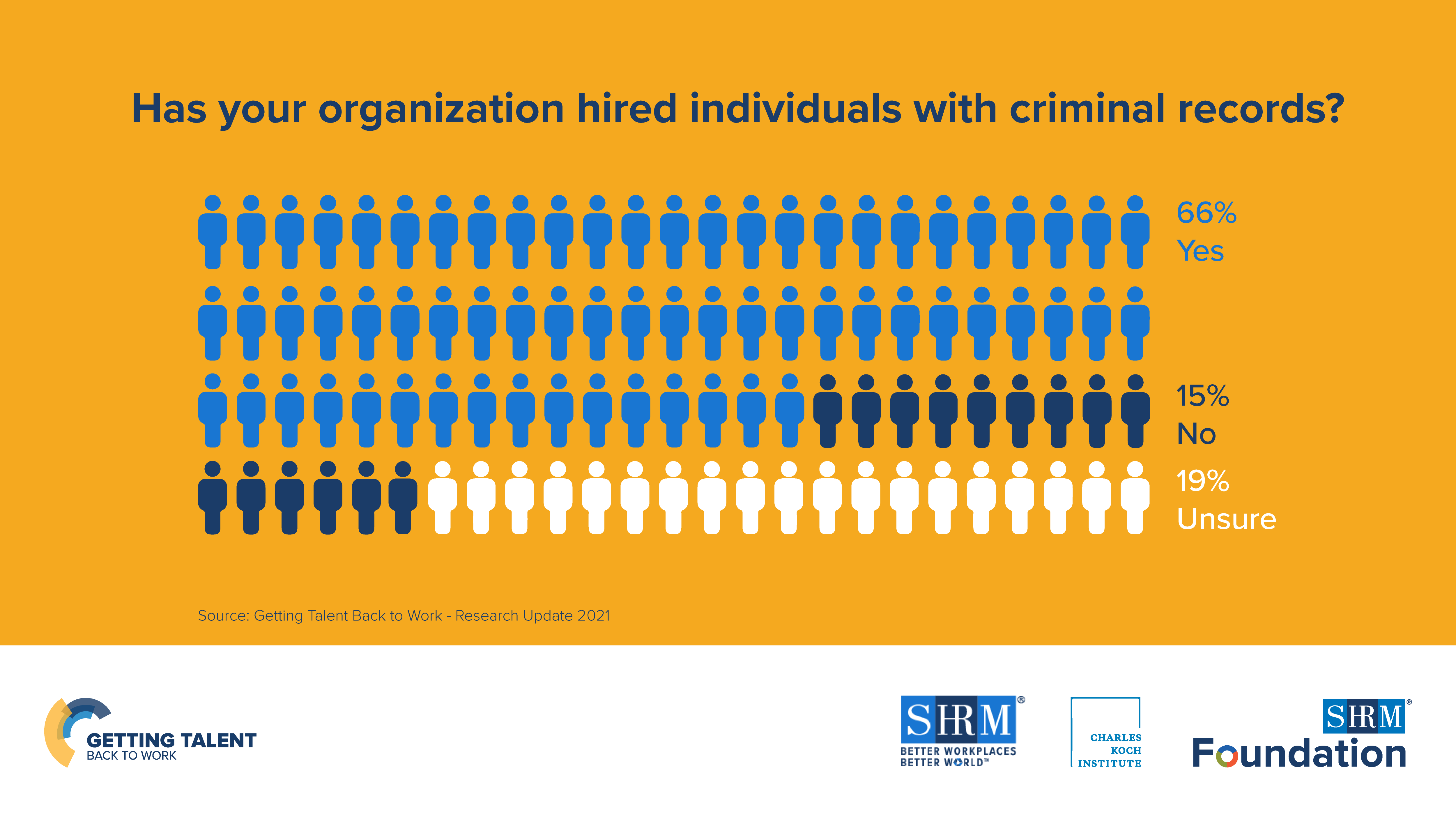 In May of 2018, the Society for Human Resource Management (SHRM) and the Charles Koch Institute (CKI) launched a groundbreaking survey to understand employers’ perspectives on hiring individuals with criminal records. The findings revealed companies were eager to tap this talent pool. With the results in hand, SHRM Foundation unveiled its Getting Talent Back to Work initiative, which offers resources to help employers implement second-chance hiring policies.

With unemployment skyrocketing during the COVID-19 pandemic, SHRM and CKI wanted to know if employers were less open to hiring the more than 70 million Americans who have some form of a criminal record.

New findings from an updated survey of business and H.R. leaders conducted between February and March of this year and out today show they are not. In fact, more than half (53 percent) of H.R. professionals say they would be willing to hire individuals with criminal records, up from just 37 percent in 2018. Ninety-four percent of H.R. professionals say the pandemic had not changed their willingness to make second-chance hires. Business leaders also expressed a greater willingness to hire workers with criminal records.

Respondents from larger organizations, and from the manufacturing, construction, utilities, and retail trade sectors were most likely to say they have hired second-chance workers or to say they are open to hiring from this talent pool.

The survey indicates employers’ hiring decisions are based almost exclusively on finding the best person to fill a job. Half of business leaders say they want the best candidate regardless of criminal history, while 68 percent of H.R. professionals agree with that statement.

Second-chance workers are as successful as other employees in meeting this goal. According to the survey:

Second-chance hiring also is not a cost burden. Eighty-one percent of H.R. professionals say it costs about the same to make a second-chance hire as it does to hire someone without a criminal record.

The new survey identifies potential barriers to second-chance hiring, highlighting that employers worry about the legal liability they undertake when hiring a person with a criminal record, for example. They also worry about the perception customers will have and government policies that make second-chance hiring more difficult. The concerns were largely the same as those identified in the 2018 survey, which can be easily overcome with proper awareness and policies.

The vast majority of H.R. professionals (70 percent) and a plurality of business leaders (43 percent) say their organization would make special considerations for second-chance hires if they thought the applicant was the right person for the job.

The report shares insight into how the criminal-justice system can prepare workers for re-entry. For instance, 58 percent of H.R. professionals and 44 percent of business leaders say a candidate with a demonstrated consistent work history would make them much more willing to hire that candidate. Additionally, both H.R. professionals and business leaders indicate they would be much more willing to make a second-chance hire if that candidate presented verifiable employment references and received training or education while incarcerated.

Read the release announcing the updated results and the full report.